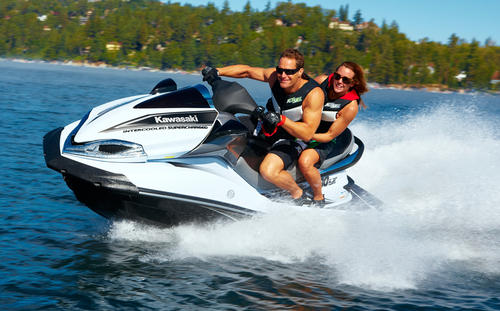 The Jet Ski* is like a motorcycle. You sit right on top of a big engine. It is meant for one thing-to speed across the water. It is not really a seaworthy vessel. Don’t believe me? Try stopping out in the middle of a lake with some big waves as the water laps into the footwells and it seems to be sitting lower and lower in the water. You wonder if it’s going to stay afloat. But just hit the gas, the water drains out, and you are flying across the lake again.

This is a true story of my adventure with the 125 horsepower watercraft. My wife and I were launching the Jet Ski onto our local lake. The launch is shallow with a lot of rock. We both were on the Jet Ski and drifting toward shore so I hit the gas. I heard “Clunk, Clunk, Clunk” as the jet engine sucked up some of the rocks. Not a big deal, I’d heard that sound before without any problems. The initial hit on the gas got us out about 20 feet from the launch. The engine stopped. I tried to start it again, but nothing. Here we were sitting on the most powerful watercraft on the lake and stranded. After getting to shore and taking the Jet Ski home I found that one of those rocks I heard clunking was jammed in the impeller and had locked up any hope of letting this machine go.

The situation is much like the man who has the rock of sexual impurity in his life. One seemingly small sin, and it’s stopping him. He is a powerful man who is a good Christian, but the small rock of impurity has made him ineffective. He is not involved in leadership in the church and, if he is married, has trouble being the spiritual head of the household. There’s no way he can witness to unsaved friends because of the shame and feeling he would just be a hypocrite. He is reluctant to be in a small group at church, or go to a men’s retreat, because he is afraid he’ll be found out. His relationship with his wife is suffering because he is spending his sexual capital on porn instead of on her. Whether married or single, he’s spending way too much time looking lustfully at women during the day and at the office.

But, there is hope. Don’t let that one rock stop you from being the man that you, and God, want you to be. You can loosen this rock of impurity from your life with God’s help. You are equipped and ready to be a fully devoted follower of Christ. There are resources to help you, but the first step in surrendering the situation to the Lord and admitting you can’t do it on your own. Christ died for all your sins, and sexual sin is no exception. He wants to re-establish fellowship with you.

But, don’t put it off. Commit to deal with this now. Oswald Chambers had this to say about sin:

Bring it immediately into the light and confess, “Oh, Lord, I have been guilty there.” If you don’t, your heart will become hardened through and through. One of the penalties of sin is our acceptance of it. It is not only God who punishes for sin, but sin establishes itself in the sinner and takes its toll. No struggling or praying will enable you to stop doing certain things, and the penalty of sin is that you gradually get used to it, until you finally come to the place where you no longer realize that it is sin. No power, except the power that comes from being filled with the Holy Spirit, can change or prevent the inherent consequences of sin. 1.

1 Corinthians 6:13 (b)-But sexual sin is never right: our bodies were not made for that but for the Lord, and the Lord wants to fill our bodies with himself. (TLB)

Proverbs 28:13-People who conceal their sins will not prosper, but if they confess and turn from them, they will receive mercy. (NLT)

I have written a daily devotional specifically for men on their purity journey. I am sure you will find it helpful. Watch for it’s release Fall 2017 from Tristan Publishing.  tristanpublishing.com

Now I want to hear from you. Leave a comment and let me know if you relate to this story. Tell me where you are in your purity walk.

Follow me to hear about my latest blogs and to see exciting news on the book release at: davehowe.org

*Jet Ski is a registered trademark of Kawasaki